in Highlands Life, Home and Garden, People, Wine and Dine

In The Kitchen With Bee Satongun // PASTE AUSTRALIA

A desire to raise their daughter in Australia and a need to step off the merry-go-round of events, appearances, collaborations, media commitments and a crazy amount of overseas travel that come with owning a Michelin-starred restaurant in Thailand, has seen the return to the Southern Highlands for husband and wife team, Bee Satongun and Jason Bailey.

It all started with Classical Thai, a relaxed and local favourite in Mittagong. Bee and Jason owned and ran Classical Thai for five years before deciding to move to Thailand seven years ago with the goal of creating the best Thai restaurant in the world. Lofty goals, you might think? Totally achievable for this pair.

Paste Bangkok was awarded a Michelin star for three years running, and in 2018 Bee was named Asia’s Best Female Chef. Oh, and the restaurant was named in the highly respected Asia’s 50 Best Restaurants list.

Last year, the pair decided to return to Mittagong – Jason’s home town – and set up Paste Australia in the Southern Highlands.

While the bushfires and COVID-19 have delayed the opening date (although they’ve been offering takeaway for some weeks now), the Paste Australia team are ready to go with Thursday the 18th of June locked in for the very first night of dining.

We caught up with Bee, in amongst the pre-opening mayhem, to chat more about Paste Australia and she’s shared a super simple favourite recipe of hers for you to try at home.

Yes, we missed Australia. It’s been nice to come back home.

Our daughter, Sydney is 7 years old now and we want her to grow up in the Southern Highlands. Jason and Sydney moved back here last year. Jason focused on getting Paste Australia ready while I was still doing lots of travelling for Paste Bangkok. I moved back here in January this year.

We will need to travel back to Asia as needed, as we still own Paste Bangkok and are in partnership with Paste At The Apsara in Laos. We have a great team of managers and kitchen staff. They have been with us from the start and know what they’re doing, so we trust them to keep the restaurant operating and delivering high quality food and service.

2 // Tell us a bit more about your food philosophy and what you’ll be serving up at Paste in Mittagong?

It’s our interpretation of traditional, old-world Thai cuisine. We use traditional methods but then modernise it through being innovative and building on the flavours.

Thai cooking is herbal-based cuisine, so when you’re actually tasting the food, you should taste the herbs as well as the seasoning. We stick with the traditional methods to achieve that, but how we combine all the elements and how we present the dish is what makes us different. Many of our dishes are simple to create but complex in flavour.

It’s important to source our ingredients locally too. We want to combine Thai traditions and flavours with Australian produce and are connecting with local farms to achieve that.

We also want to take customers at Paste Australia on a journey. The menu will have plenty of traditional Thai dishes that everyone will recognise but with Paste’s special twist or interpretation of that. Then, as they start to trust us more, we’ll introduce more items from our other restaurants to the menu for our customers to experience.

It’s all been so uncertain. We're glad we were able to softly open with our takeaway offering as it’s given the staff time to get used to the new systems and the menu.

And we were expecting restrictions to lift a bit later than they have, so the last couple of weeks have been a bit crazy.

4 // What was life like in Bangkok when the restaurant achieved Michelin star status and you were named Asia’s Best Female Chef?

When we got the Michelin star, it was like a big wave coming through. It was very busy in the restaurant with lots of media interviews and requests for collaborations. We were involved in the Redbull Hangar-7 concept and did Four-Hands Chef Dinners with other restaurants. I was also invited to lots of international food festivals including the Hong Kong Wine & Dine Festival, Taste of Paris and the St. Moritz Gourmet Festival.

I was in and out, in and out and eventually Sydney said to me, “When are you going to stop?”

That’s when I knew we had to really slow down and get back to Australia.

We’re really excited about Bee and Jason’s return to Australia and can’t wait to head to Mittagong and experience Paste Australia for ourselves. In the meantime, you can give recreating some Paste magic a go in your own kitchen thanks to Bee sharing this fresh and zingy recipe with us.

“This is the very first dish I created for Paste. It’s simple but when the flavours go together with the banana flower, the lychee and the sauce, it’s a bit more complex,” Bee says. 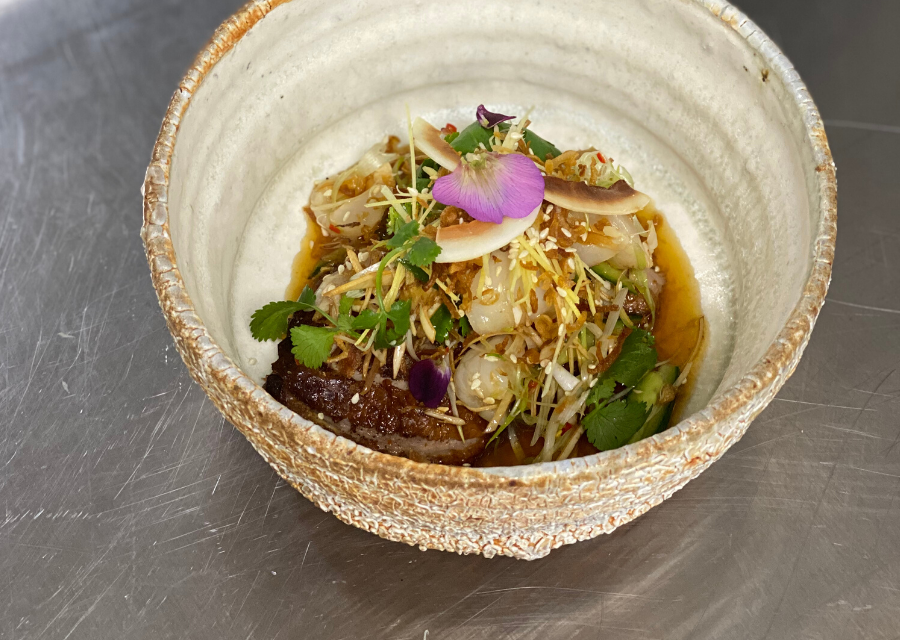 Soy Duck or BBQ Duck, cut into strips. You can get this from a supermarket or Asian grocer.

2 Lychee or logan (halved and seeded)

Vietnamese mint (use a lot - don't be scared!)

Quarter of a cucumber 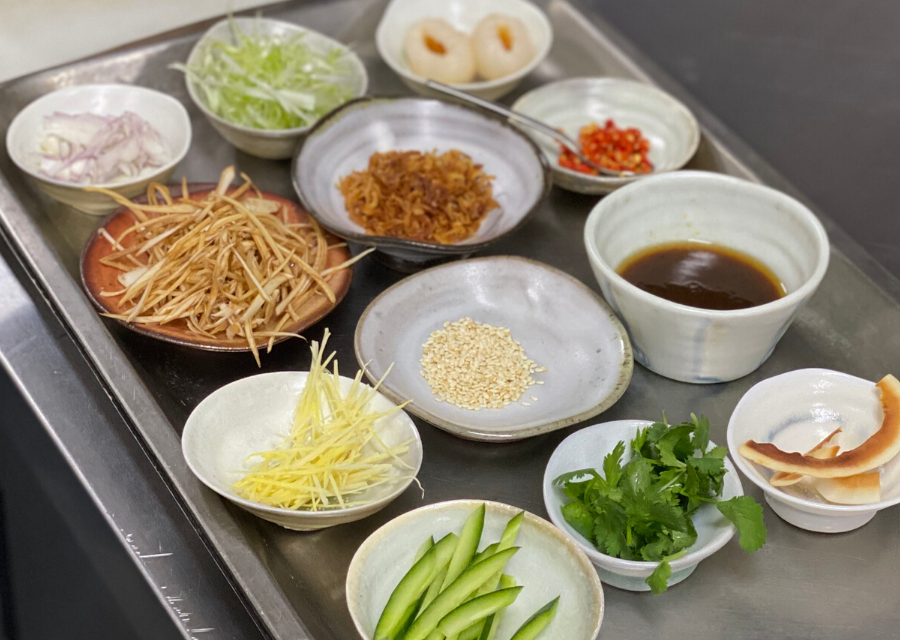 Put all the salad dressing ingredients (except for the lime juice) in a saucepan and gently heat and dissolve. Turn off the flame, then add the lime juice.

Build the dish, starting with the duck. Slice it and then place at the bottom of the bowl.

Place the chilli in the sauce and then drizzle the sauce over the dish.

Then place the remaining ingredients on top, garnishing with the julienned ginger and toasted sesame seeds. 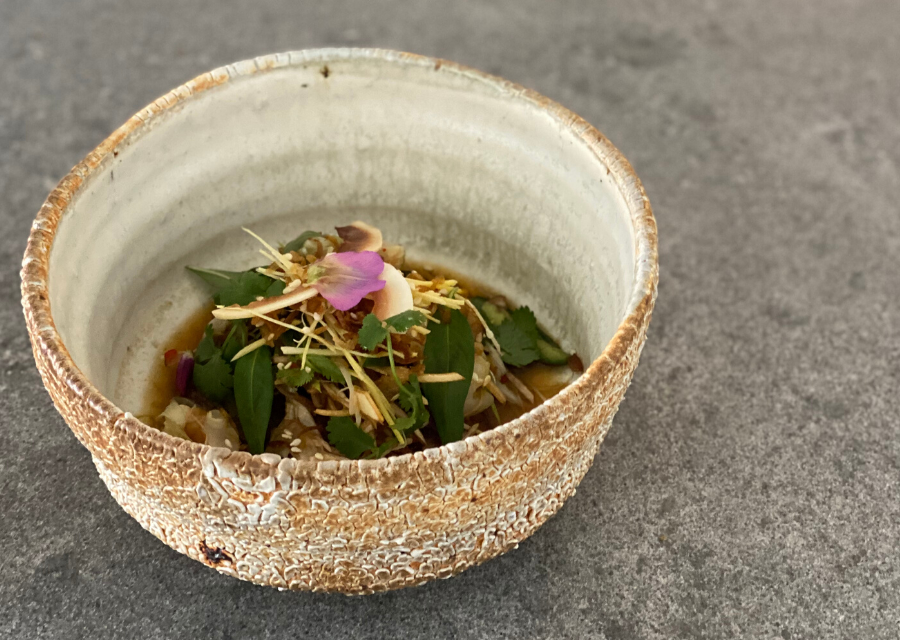 The beautiful Southern Highlands, NSW has been chosen as the first Australian stage for Thailand’s famous, Michelin-starred culinary institution, Paste Australia. Amid the historic streetscape of Mittagong, renowned chefs Bee Satongun and husband, Jason Bailey, will take diners on a palate-tantalising adventure that showcases their bold and masterful approach to Thai cuisine.

BEHIND THE BIZ // Sam Mulholland of Mulholland Property
in Business and Careers, People, Highlands Life, Home and Garden
August 04, 2020
Breweries of the Southern Highlands
in Entertainment, Wine and Dine, Getting Out And About, Highlands Life
July 29, 2020
HIGHLANDS CREATIVES // Jonti Roland Shepherd
in Highlands Life

Meet The Maker — Q & A with Jonti Roland Shepherd, Roland Upholstery   How did you get involved in your craft?   “I have grown up around fabric as my mum, Joh Trapnell, has run her soft furnishing business, Suite Recovery, in the Southern Highlands since 2000. I decided I wanted to be an upholsterer as...