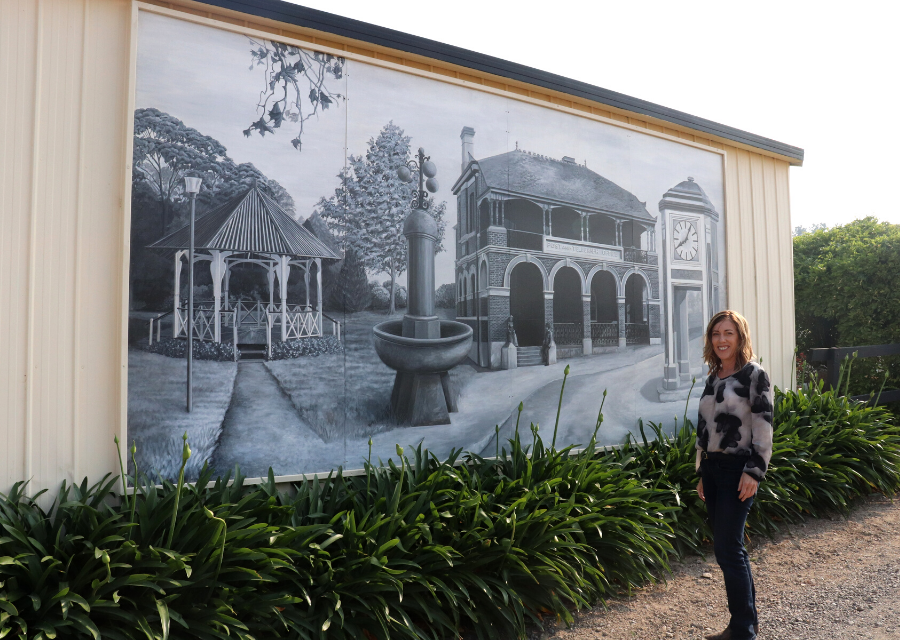 When local historian, David Baxter asked Mittagong artist Angela Macpherson to create a large-scale artwork to form a backdrop for his historical collection in Moss Vale, she didn’t blink!

Angela specialises in unique and highly detailed artwork incorporated into architecture and was actually the lead artist on the painting of the Great Australian Clock in Sydney’s Queen Victoria Building. Wow!

So two huge murals on the side of a shed in Moss Vale? No problem! We chatted to Angela about the process involved in creating these amazing detailed works of art that have become quite the local tourist attraction in Mossy. 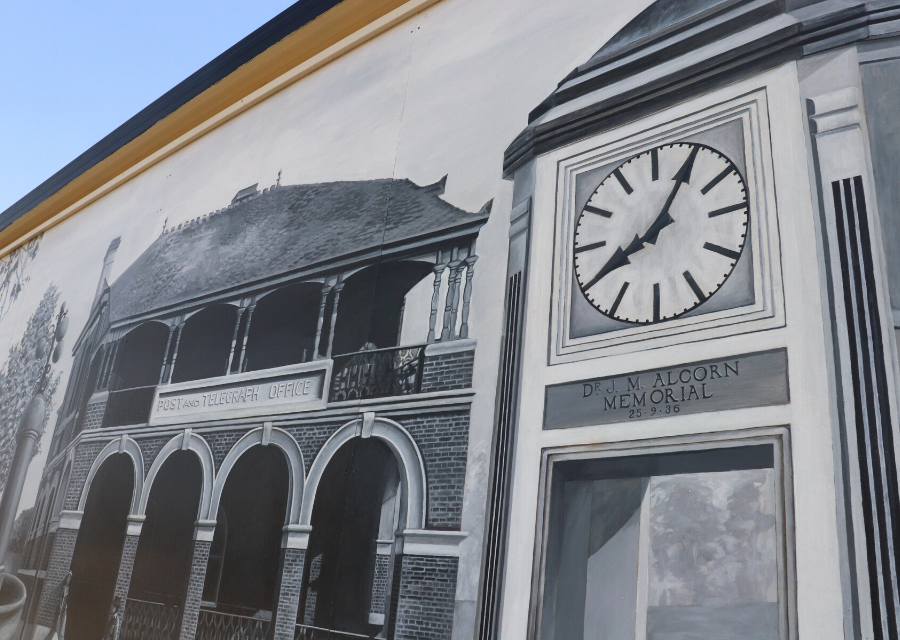 How did art become a part of your life and ultimately your career?

I was the kid that sat in the art room while everyone else played outside. I would much rather stay inside and draw! While I was still at high school, I did art at TAFE part time then completed a Bachelor of Visual Arts at university.

For me, art has always been about creating pieces and works that made other people happy.

I tried moving into the advertising and graphic design world, but my heart wasn’t in it. I love following that trail of enjoyment that art creates for people and focusing on how it creates a positive influence on people and spaces.

Later I taught fine art at TAFE, subjects such as painting drawing and art history which no longer exist in these colleges due to commercialisation. What drew you to working on pieces of such a large scale?

I’m not entirely sure why I need to do large things – maybe its because I’m short!! I did a lot of murals when I was younger and actually straight after school, my art teacher encouraged me to create murals with other schools and school children, which I loved. I enjoyed the camaraderie of working with the kids and as a team. Tell us about the two amazing pieces you’ve created for David Baxter in Moss Vale?

David is an avid historian and passionate about the history of Moss Vale. He engaged me to create a mural that depicted Moss Vale at a certain era – it ended up being a nod to the early 1900’s – 1920’s. There were about seven iconic things that he wanted to include, such as the bridge, the clock tower and the post office.

The mural is at 70 Beaconsfield Road, Moss Vale and has become quite the tourist attraction! David has collected a number of historic items over the years, from backhoes to a replica of the Moss Vale clock and an old miner’s cottage, and he wanted a piece of art that would create a backdrop for his collection. It’s created a bit of a landmark for it all.

It’s on David’s property and he invites the general public and tourists passing through to come by and have a look, and he’s always happy to have a natter about all things Moss Vale and history! You can see it from the road but it’s fun to go in and chat to David.

It’s very detailed! Tell us about the creative process?

I did quite a lot of research and to be honest, you’re only as good as your reference materials! The process can be intensive focus, almost meditative, in order to produce the high level of detail. I drew it up in watercolour pencil before I painted it with very tiny brushes.

When you get up close to it, you can see the detail in the woodgrain, bricks and water. There’s a different sort of energy that comes through a piece of art when it has a high level of detail. It’s a huge project for an individual artist. Did you have some help?

Absolutely. Three local artists started the bridge mural for me – Corinne Dany, Penny Levitt and Carol Thomson. And when you are creating a piece of art that is going to live outdoors, there’s quite a bit of extra work and finishing involved. You have to think about the longevity of the piece and protecting it.

Project Manager Aaron Hayes from Trinity Building was my go-to for the specific building recommendations for the site. I trusted his extensive knowledge and expertise within the industry to ensure the piece is structurally sound.

Radenko Sola from Radenko Finishes is an expert finisher. He sealed the finished pieces with three coats of anti-graffiti paint. That element really brought out the depth within the image – he did an amazing job.

Local wood-pen artist Anthony Barnette helped by sealing the backs of the eight boards the murals were painted on. And local builder Richard Vollebregt was engaged by David to erect and secure the eight panels to the building on a very blustery day!!

So it was a definitely a team effort! It's exciting to collaborate with builders who get a chance to participate in a beautiful construction that satisfies their creativity.

How long did the project take?

It was about nine months from inception to completion. I worked on it part time for six months and then three months full time, finishing in early August 2019. 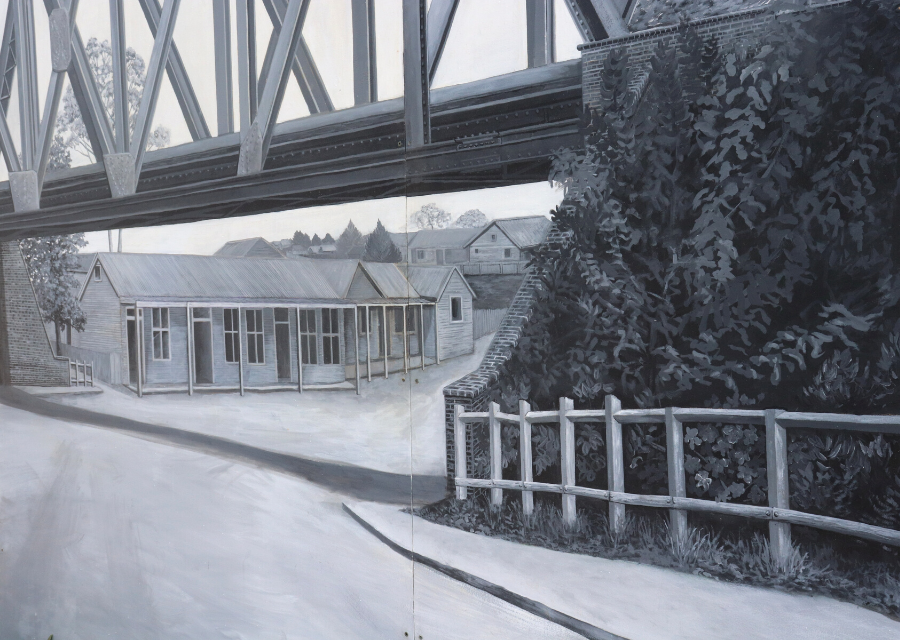 This certainly isn’t your first big project. You worked on the Queen Victoria Building clock tower!

Yes! I was fortunate enough to work on the Great Australian Clock in the QVB. I started to do all the painting, but it turned out to be too big for one person, so we took on another two artists – that was a really interesting collaboration! One of the artists was excellent at landscape, the other was good at drawing people and I was good at creating the composition for the overall piece and putting in the framework. We also had a beautiful illustrator who was great at creating fur and skin and just got it right on.

There are four pieces that were solely done by me right at the top of the clock – it’s highly detailed of the watches and clocks the clockmaker owned. Tell us more about the commissioned pieces you do for clients and organisations.

After the QVB project, I moved onto a solo project of 36 pairings highlighting Chinese history for a tiered floor displayed beneath a two tonne jade carriage! This was commissioned by Ipoh Pty Ltd and I believe is now in Malaysia.

My own personal work is very detailed, which is not a format that has been delivered by a lot of artists in such a large form or scale. To be honest, I don’t really like calling what I create murals. I like to call them dreamscapes – Maro dreamscapes. Maro is Japanese for truth and integrity. 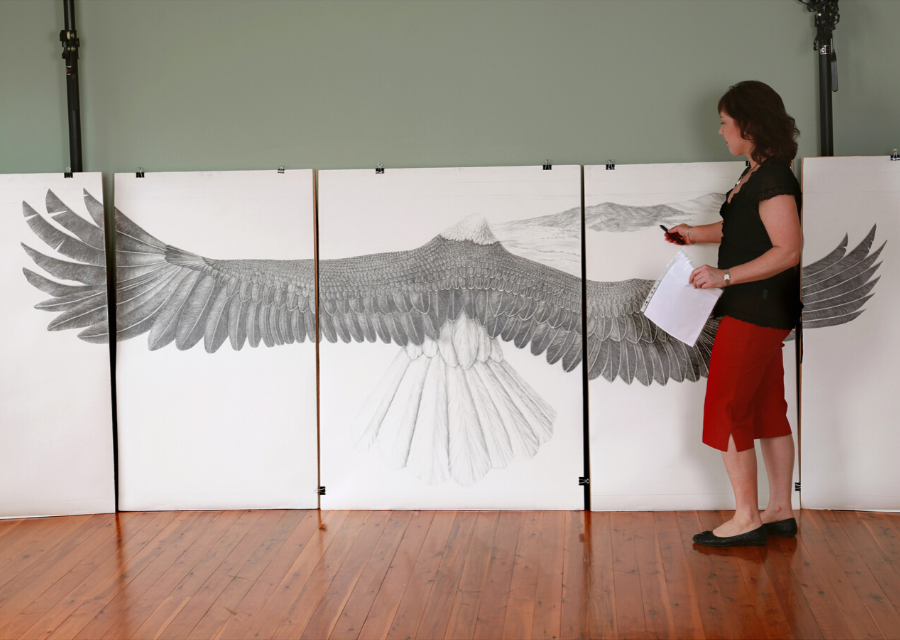 Rather than a piece of art that is hung on a wall, I create something that appears as though it is part of the actual space, whether it be corporate or domestic. As such these unique, one-off Dreamscapes are possible to be formatted onto different building materials such as glass or ceramic tiles.

I particularly like the double usability of sound panels and working the art piece in with eco-design concepts.

There is more interest in a fine detailed painting or image in a permanent setting. An individual artwork in a frame is separated from the wall. My art can incorporate the whole wall or partition, which gives it a different energy and a higher level of impact.

People are drawn to my work because they feel the energy that it carries for them and they get how that influences their space and ultimately, themselves. I love working with details and intricacy. The reason I do what I do is so I can create a positive environment that positively effects people. I believe art and music has the potential to make you feel good AND bad. I like to focus on the good! 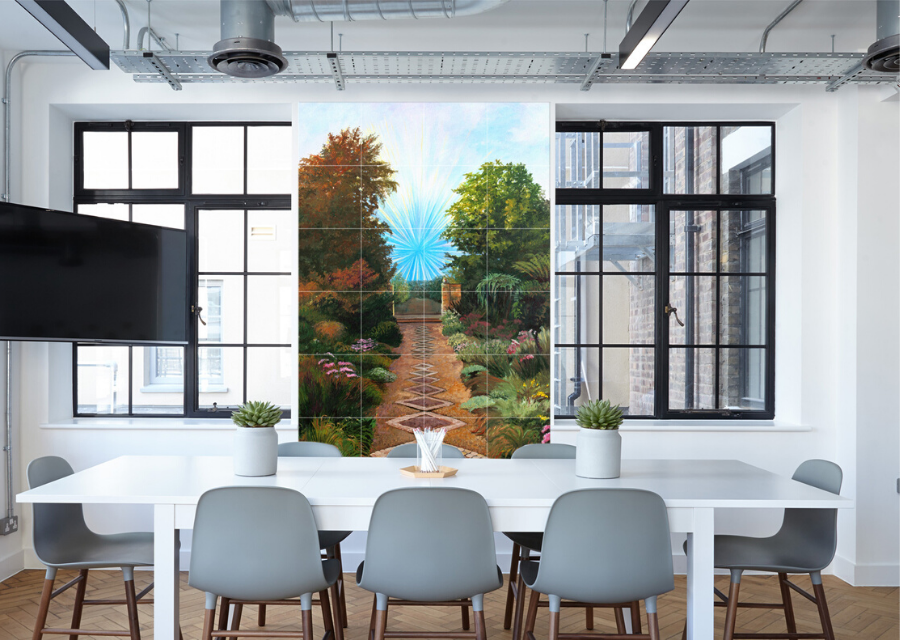 Angela Macpherson is a Southern Highlands based artist and artistic director, specialising in hand-painted structurally integrated art. She creates unique and highly detailed artworks incorporated into architecture for private and corporate clients. How lucky are we to have her here in the Highlands? Click here for more information about Angela’s work and projects she has worked on.

Sunday 6 September is when we celebrate Father’s Day this year! Dads, grandads, stepdads, father figures and funcles – whoever it may be. Find the perfect way to say thank you to the wonderful guys in our lives with The Fold’s Guide To Father’s Day In The Highlands.      DRINK It’s pretty hard to go ...

August 24, 2018
WINTER WARMERS // By The Open Fire
in Wine and Dine, Getting Out And About, Highlands Life
June 01, 2020
Where to get face masks in the Southern Highlands
in Family, Highlands Life, Health and Beauty
August 05, 2020